On 20 April, the Ring-fencing and Proprietary Trading Independent Review launched a call for evidence with the aim of supporting the Review Panel with its ongoing analysis. The call for evidence sought views from interested stakeholders on several questions that aimed to understand the impact of ring-fencing on financial stability; customers, competition and competitiveness; operation of the regime; and the adequacy and impact of rules applied to proprietary trading. A summary of the responses is provided below. This summary does not reflect the views of the Review Panel.

Chart 1: Distribution of responses [A list of respondents is noted in Appendix A below.] 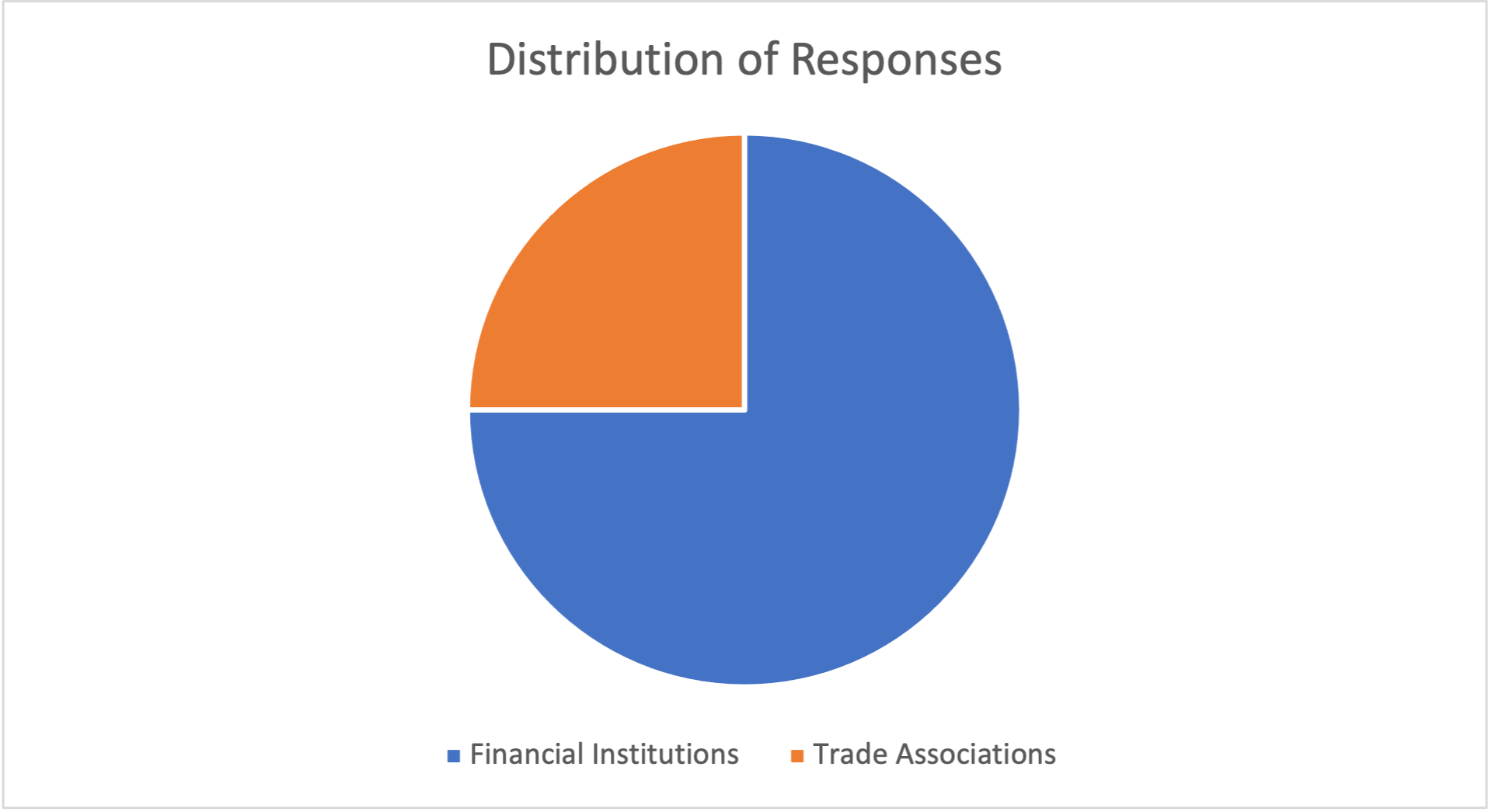 In response to our questions on financial stability, it was highlighted that the ring-fencing regime should be considered in the context of the wider package of regulatory reforms that was introduced following the financial crisis, including capital and liquidity requirements, the new resolution regime, stress testing, and the senior managers’ regime, to name but a few.

There was a consensus view among respondents that the wider framework of regulatory reforms has improved financial stability and created a sector that is significantly more resilient and more resolvable than pre-crisis times. Respondents cited that capital levels have increased materially, with banks holding between two to four times more capital than before the financial crisis, depending on how you measure capital levels. Some respondents pointed to the recent Covid-19 crisis as a demonstration of the financial sector’s resilience.

While some respondents suggested direct contributions towards financial stability from the ring-fencing regime, such as the reduction of interconnectedness and the restructuring of banks, there was little evidence provided overall to suggest that ring-fencing has been a contributing factor.

Some respondents went further in their responses to suggest that the ring-fencing regime has had a negative impact on financial stability due to reduced diversification of a bank’s portfolio. In particular, the balance sheet of a ring-fenced entity has led to a concentration of risk on domestic retail products, most notably UK mortgages. They suggest that this leaves banks overly exposed to domestic shocks, or shocks in particular segments of the domestic economy. Respondents noted that this was being driven by a significant amount of trapped liquidity within the ring-fenced entities.

Whilst few respondents drew out direct positive impacts of ring-fencing on financial stability, it was noted by some that a financial crisis has not occurred since the introduction of the measures and so the regime, designed as a response to a financial crisis, has not yet been tested. It was also noted that the measures had not been in place long enough to fully assess the direct impacts of ring-fencing on financial stability along with any unintended consequences.

Reasons cited include the definition of Relevant Financial Institution (RFI) stopping businesses being served within a ring-fenced entity, including emerging fintech companies. It was highlighted that ring-fencing has placed an additional administrative burden on both the banking group and the customers they serve. Some businesses are forced to receive services from both sides of the ring-fence, leading to duplication of processes, increased costs and an inability to streamline services for customers.

Finally, some respondents raised the impact that Brexit has had on the ring-fenced banking groups with respect to international competitiveness. It was noted that Brexit was not accounted for in the design of the regime and it has led to ring-fenced groups reducing the size of their European perimeter. Some respondents suggested that this, along with some foreign banks sitting underneath the £25 billion threshold at which firms come into scope of the ring-fencing regime, has weakened their position with international firms.

There are several suggested amendments to the operation of the regime set out in the responses. They focus on providing firms with greater flexibility and simplifying of the current guidelines including the definition of RFIs and activities included under the Excluded Activities and Prohibitions Order (EAPO). Additionally, respondents suggested that the regime should allow ring-fenced entities to better support productive and green finance.

Further, it has been suggested that geographic constraints within the regime potentially limits growth of ring-fenced entities outside of the UK, leading to a competitive disadvantage. There were also suggestions that greater discretion could be provided by the PRA rather than the regime being set out in primary and secondary legislation, and that a more risk-based approach is established.

Fewer organisations provided responses to our questions on proprietary trading than ring-fencing. Overall, responses show a general acceptance towards the current rules, suggesting that existing regulations remain appropriate and has contributed towards creating a more resilient financial system. There was a consensus among respondents that proprietary trading is no longer an attractive market for banks to be engaged in, with most no longer partaking in classic proprietary trading following the financial crisis.

The responses provided are hugely valuable in the ongoing analysis of this Review and will be considered in the process of drawing conclusions. The Review Panel will continue consulting with a wide range of stakeholders including regulators, government and other interested parties. Further updates on the progress of the review will be provided in due course.

Appendix A: Respondents to the Call for Evidence

The RFPT Review Panel meeting on Tuesday 3 August was chaired by Keith Skeoch and attended by all Panel members.

The RFPT Review Panel meeting on Tuesday 6 Jul was chaired by Keith Skeoch and attended by all Panel members.